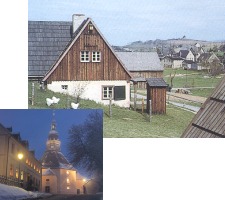 The rich silver ore deposits not only gave the Ore Mountains their name but also provided an income for generations of miners, like the ancestors of the Ulbricht family. However, when the formerly prosperous mining industry began to dwindle, people living in the area had to find new sources of income. Many of them became wood-carvers and wood-turners and entrepreneurs, eventually.

In 1928, Christian Ulbricht‘s father founded the company „Otto Ulbricht‘s workshop for fine wooden crafts and toys“ in the small town Seiffen, in the heart of the Ore Mountains. His success was built on entrepreneurial skills and a remarkable inventiveness. At the height of his career, Otto Ulbricht was awarded at the World Exhibition in Paris with a gold medal for his children’s room clock designs, and a group of Kurrende singers. 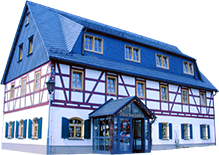 After World War II and the dispossession of the Communist government resulted in the end of the company in Seiffen, now in the Communist East, Otto Ulbricht and his family were forced to flee to West Germany. It was in the village of Lauingen on the Danube River in Bavaria, that he re-established his Company, and eventually handed over the management to his son Christian Ulbricht in 1968. After Germany was reunited in 1990, Christian Ulbricht bought back his father‘s original company in Seiffen.

With a lot of passion and diligence the family and their team create traditional wooden art that brings joy to grown-ups and children alike. And in every single piece the spirit of Christmas is alive.